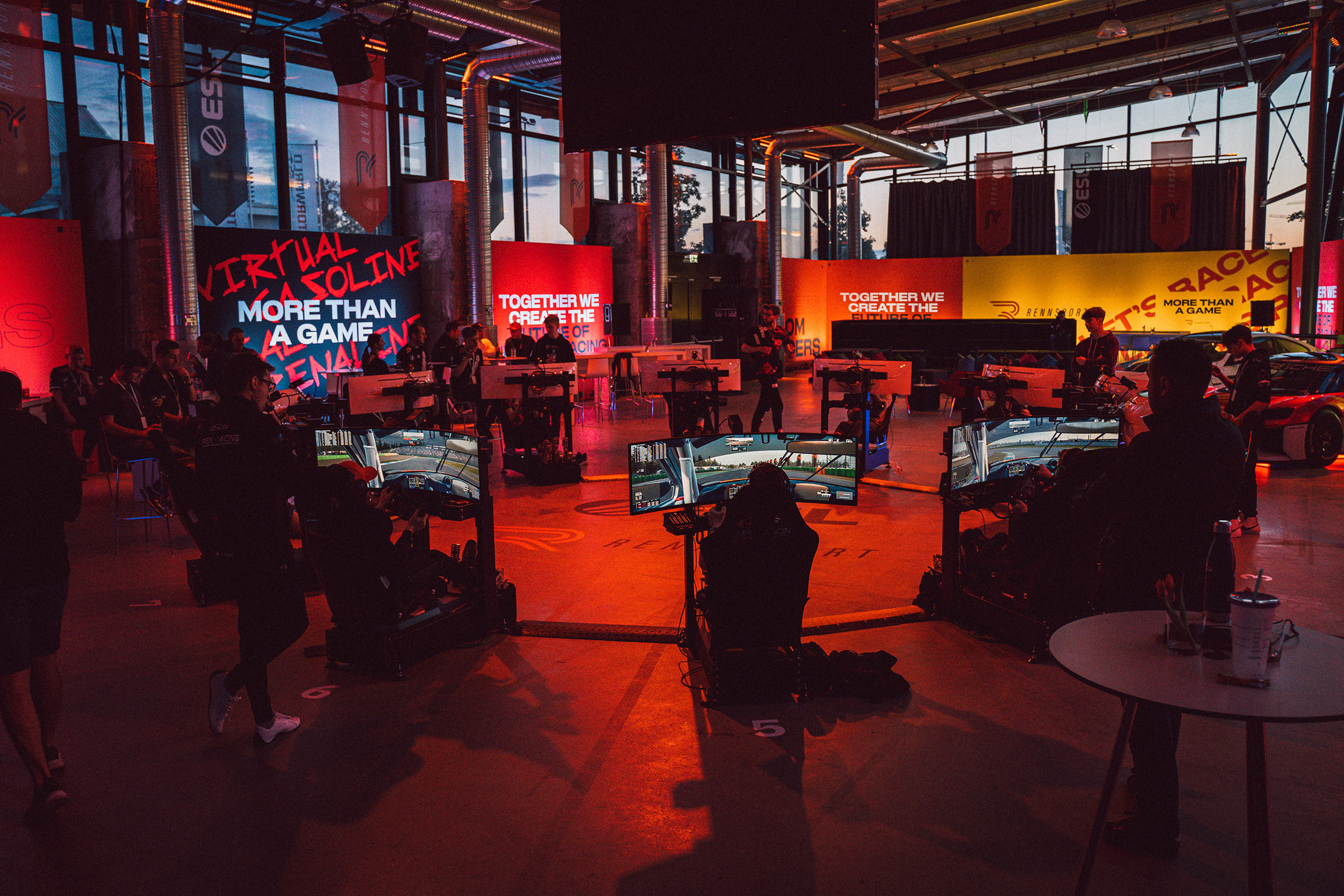 The official test phase of the RENNSPORT Alpha version kicked off

We gave up to 150 selected guests consisting of pro sim-racers, team managers, influencers and content creators an insight into the current state of development of RENNSPORT and also the exclusive chance to put the simulation through its paces for 3 days from May 27 – 29.

With ESL commentator Matthew “Sadokist” Trivett and Wil Vincent, two well-known faces of the esports scene led through the 3-day program and commentated on the competitions in their usual entertaining manner. According to our motto “community-first”, the focus was on the exchange with the guests about RENNSPORT, the esports cosmos and the future of sim racing. To create a relaxed but highly focused atmosphere and also have good time together we tried to manage a well-balanced mixture of esports competitions and discussion panels on topics such as “Digital Ownership”, “What’s needed for a state of-the-art sim?” or “Future of Sim Racing Esports”. A live DJ, bar menue and live sports such as 24h Nürburgring or the Champions League final rounded up the friendly feeling at the venue and gave enough space to casually end the days.

Our development process is lasting for 2 years now so this event served as a major milestone in our company´s history as we have been putting a lot of games publishing know-how, energy and heart and soul into the development of RENNSPORT. The feedback we gathered was truly impressive as we could surprise everyone with an advanced simulation that no one expected at this stage. The early point in time at which the first testers were allowed to play RENNSPORT is unusual compared to others in the market, but this perfectly reflects our path as we want to be community-first early on and step into the further development together with our fans and esports enthusiasts. We want to give all motorsport enthusiasts the opportunity to be part of the further development of the sim through various occasions.

The next step to proof this will be the start of the closed alpha key give away. Stay tuned on our channels to find out how to get your hand on your limited code within the next weeks and months.

Together we create the future of virtual racing. JOIN OUR JOURNEY.

ULTRA REALISTIC RACING – ACCESSIBLE TO ANYONE

For Racers. From Racers.

It’s our obsession to create the perfect racing game with you. Ready for ultra-realistic sim racing but also fun to drive. We know that it is a long journey to reach this goal. But we are determined to get there together with our community.

Starting from scratch, technological advancement and modern software architecture enables us to take the next step in virtual racing experiences. This creates stunning behind-the-wheel graphics and a wide range of options for user-generated content as an interactive community.

We want to inspire with a bold combination of driving physics developed and validated by experts within the automotive industry and combined with custom Unreal Engine 5 graphics.

SETTING THE STAGE FOR A NEW GENERATION OF ATHLETES

ESL and RENNSPORT are committed to sim racing

ESL as the world leader in Esports is now ready for professional sim racing. In collaboration with RENNSPORT everything has been developed with the requirements of Esports in mind from the very start.

Athletes and teams are the core of every sport

ESL, “where everybody can be somebody” and RENNSPORT are a perfect fit for a sporting system with low entry barriers and a vivid dream to become a professional athlete or even a star of the sport. A competition system for athletes and teams with pure sportsmanship, long-term perspective and economic appeal.

Technology drives attention to a sport that truly deserves it

We believe in evolving the fascination about our sport and driving sustainable growth by introducing modern technology for audience interaction, professional broadcasting tools and easy to share highlight clips.

A PLATFORM WITH MUCH MORE POTENTIAL

Your sweat, your tears, your ownership

You invest your time, spend money on your hobby – and what’s yours in the end? Everything! With RENNSPORT you can build your own legacy with individual cars, custom tracks and much more. Your assets will be owned by you. And you can trade them through the marketplace of your choice.

We build technology that bridges the gap between professional athletes, amateur racers, sports enthusiasts, collectors and many more. In a nutshell, a place for like-minded people with a shared passion.

Tool kits for the modding community

Our goal is to give our community the tools to enhance RENNSPORT with great user-generated content and let their creativity run wild.

This website stores cookies on your computer. These cookies are used to collect information about how you interact with our website and allow us to remember you. We use this information in order to improve and customize your browsing experience and for analytics and metrics about our visitors both on this website and other media. To find out more about the cookies we use, see our Privacy Policy. If you decline, your information won’t be tracked when you visit this website. A single cookie will be used in your browser to remember your preference not to be tracked.”, you consent to the use of ALL the cookies.
Reject All Accept All
Manage consent

This website uses cookies to improve your experience while you navigate through the website. Out of these, the cookies that are categorized as necessary are stored on your browser as they are essential for the working of basic functionalities of the website. We also use third-party cookies that help us analyze and understand how you use this website. These cookies will be stored in your browser only with your consent. You also have the option to opt-out of these cookies. But opting out of some of these cookies may affect your browsing experience.
Necessary Always Enabled
Necessary cookies are absolutely essential for the website to function properly. These cookies ensure basic functionalities and security features of the website, anonymously.
Functional
Functional cookies help to perform certain functionalities like sharing the content of the website on social media platforms, collect feedbacks, and other third-party features.
Performance
Performance cookies are used to understand and analyze the key performance indexes of the website which helps in delivering a better user experience for the visitors.
Analytics
Analytical cookies are used to understand how visitors interact with the website. These cookies help provide information on metrics the number of visitors, bounce rate, traffic source, etc.
Advertisement
Advertisement cookies are used to provide visitors with relevant ads and marketing campaigns. These cookies track visitors across websites and collect information to provide customized ads.
Others
Other uncategorized cookies are those that are being analyzed and have not been classified into a category as yet.
SAVE & ACCEPT